When you spend time with your girlfriends or mentor a new female co-worker, you may only be thinking of relaxing or doing a good deed. However, women supporting women can actually be the secret to a healthy, happy life.

To find out the science behind and the health benefits of women supporting women, ENTITY chatted with Olga Levancuka, a world-leading life coach and author of “How To Be Selfish,” and Jaimie Krems, an Arizona State University grad research assistant with a focus on female sociality.

Here are all the expert-backed ways supporting other women can transform your physical, social and emotional health!

If you want to keep your body fit and healthy as you age, you need to make female friends. “Creating and maintaining good quality social connections is actually as good for our physical health as regular exercise,” says Olga Levancuka. She points to a landmark UCLA study that discovered “women respond to stress with a cascade of brain chemicals that cause us to make and maintain friendships with other women.” Basically, instead of experiencing the “fight or flight” reaction to stress, women experience “tend or befriend” thanks to a flood of oxytocin. (And you thought you were the only one who phones a girlfriend during a bad day!)

Why does this evolutionary programming even matter? To put it simply: “Female friendships not only help reduce stress, but they also extend our lifespans and reduce the likelihood of physical problems upon aging,” according to Levancuka.

One real life example of Levancuka’s claim occurred after the Soviet Union collapsed. Men in the newly free countries in Eastern Europe experienced significant decreases in their life expectancy, with the male death rate in the former East Germany rising by 40 percent! Yet, Shelley E. Taylor, UCLA psychology professor says: “Women fared better than men because they had informalities in place that helped them negotiate the new social and economic order.”

Even more recently, women with complex social networks have been found to:

Jaimie Krems agrees that female support can improve female health, adding that, in non-human primates, “having a few close female friends has been shown to increase a female’s chances of having longer-surviving offspring.” While studies have not illustrated the same effects in humans, Krems wouldn’t be surprised. 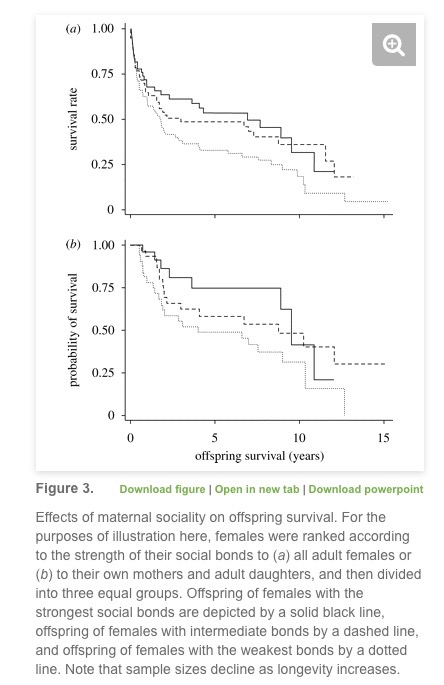 VIA THE ORIGINAL STUDY

From the studies and research found so far, it seems like women’s evolutionary tendency to bond is just as strong as it was in our ancestors – and those bonds are still helping improve women’s physical health, and possibly that of their children.

When you think of social groups and women, you may start having flashbacks of Mean Girls and high school cliques – and you wouldn’t be wrong. However, these friendship groups can help women “better process information about their social networks [and] more adeptly navigate their social landscape,” according to Krems. Basically, the more friends you have, the more “in the know” you’ll be….which could keep you from making a faux pas like asking Andrea how her husband is doing when everyone else knows they’re getting a divorce.

Krems also points to work by Nicole Hess and Ed Hagen, who discovered that women often use “information warfare” (what you might recall as cruel high school gossip) to fight for resources (ranging from mates to social status). This warfare is the exact opposite of “women supporting women” – however, Hess and Hagen’s study has its helpful points. For instance, researchers found that, when a woman has just one ally in her office, the negative gossip about that woman is significantly reduced. In other words? You really can make a difference in changing a “catty” female environment.

READ MORE: Emily Ratajkowski Won’t Stand for Slut-Shaming of Any Woman, Not Even Melania Trump

Befriending other women, though, does more than just protect your reputation. It can also be a godsend to mothers, proving the old phrase: “It takes a village to raise a child.”

“Females are also known to engage in cooperative rearing of offspring (alloparenting),” explains Krems. “Receiving tried and true information about foraging, survival, and child rearing—as well as numerous other activities—may have been a major benefit to having older [female] friends.” While the idea of having someone else help you parent may sound a little strange at first, there are plenty of examples of this still happening today. For instance, the nonprofit organization “Moms Helping Moms” distributes gently-used baby items from families who no longer need them to low-income families who can’t afford baby necessities on their own. Similarly, the Mom2Mom helpline offers advice and resources to and from moms (or other parents/guardians) of children with special needs. 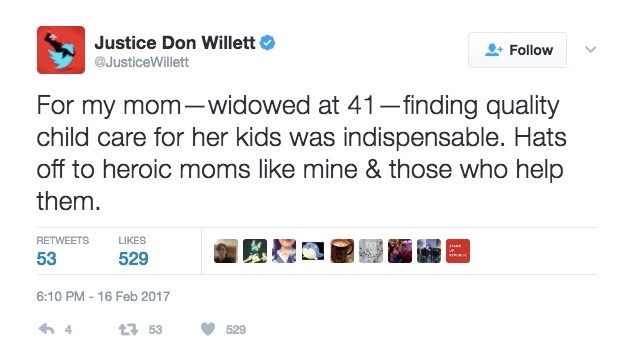 The next time you meet your girlfriends for a drink after work, just remember that your friendship comes with more social boons than a stress-relieving night out!

Perhaps one the best benefits of supporting other women, though, is how good it will make you feel. “Women tend to be better at sharing feelings and providing support and advice to each other when it comes to day-to-day stresses and difficult life experiences,” explains Levancuka, “as opposed to men who tend to form relationships around common interests without necessarily sharing their emotional worries.”

READ MORE: 5 Ways to Preserve Your Friendships While Dating

In fact, because women often attach “emotional energy” to their friends, they are able to feel mutual love and respect for one another, according to Paul Dobransky and L.A. Stamford’s book, “The Power of Female Friendship.” This love allows us to reach out and support a friend during her time of need…and let a friend to do the same for us. One 2014 study found that building friendships with other women – especially women who are different than you in terms of age, race, class, etc. – could even be the key to loving yourself more. When female students were surveyed on when and how they compared themselves to others, researchers discovered that women with a diverse group of friends were less likely to feel envious or inferior. Talk about one easy way to boost your self esteem!

Support from other women has even been shown to improve your mental health by decreasing “stress, anxiety, and depressive symptoms and increasing those calm and happy feelings,” says Levancuka. A 2009 University of Michigan study found that when women feel emotionally close to other women, their bodies produce more progesterone, which is basically the happy pill of hormones. And, in young adults, isolated women are twice as likely to contemplate suicide – a phenomena not seen in boys.

It seems, then, that women don’t just need female support to feel physically healthy or to maintain an impressive reputation. We need female friendships to be happy – which means that more women need to start supporting other women, ASAP.

Sure, we may feel competitive or jealous of other women at times – but we shouldn’t let that get in the way of our health or happiness. And, if these expert tips and research studies show anything, it’s that women supporting women is the easiest, most effective way for every woman to live a healthy, happy life.